What Annoys You Most About Khaosan Road?

I was sitting in May Kaidee’s restaurant, waiting for my Spicy Banana
Flower Salad, and an uncharitable thought sprang to mind.

What annoys me most about Khaosan Road?

I started compiling a mental list of grievances. As it took a while for the food to arrive, I managed to
come up with quite a list.

All the old stalwarts were there: Israelis haggling with street-vendors over the price of pinneaple chunks on a stick; Farang women with arses that it would take several days to sail
a barge around getting their hair braided; an assortment of tattooed
Slav, Brit and North European men with shaved heads who study Muy Thai
by day and drink Chang beer from the bottle on the street by night,
accompanied by their stupefyingly bored miniature Thai girlfriends;
the old Thai bloke who has been trying to sell me the same hammock
since 1986; 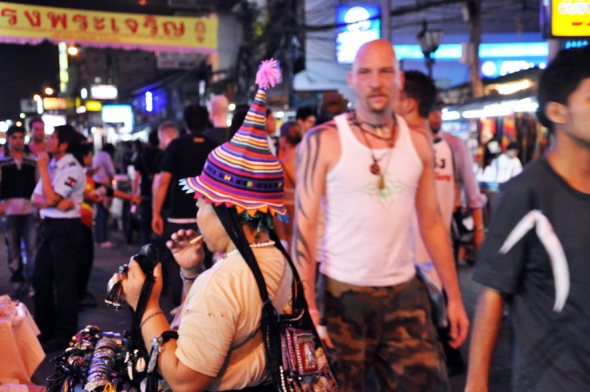 Full Moon Partygoers of any ilk; Italian tour groups
featuring women in high heels and men in sunglasses (at night and by
day); Italian Full Moon Partygoers; anyone eating in the Khaosan Rd
branch of McDonalds; Aussie backpackers who think they are the next Dr
Livingston/Sir Edmund Hilary/Scott of the Antarctic/Carlos Casteneda
because they once smoked a load of ganja and floated down a river in
Laos in a tractor inner tube; women in tribal costume flogging pointy multi-coloured tribal hats, and tribal dresses, and tribal artefacts, even though they were born and raised less than a few kms away across the river in Thonburi; 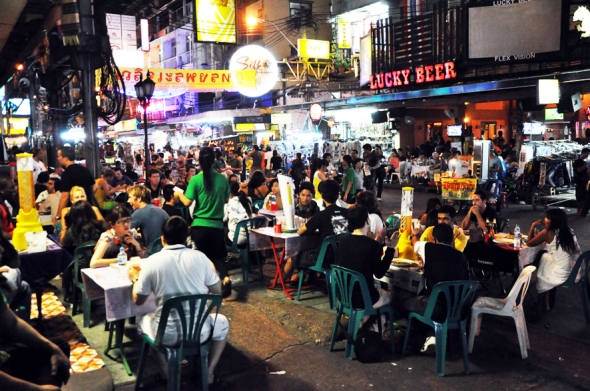 Restaurants with signs only in Hebrew; my compatriots who sunbathe and
drink beer until their faces begin to resemble that big red spot on
Jupiter and then buy, and don, the aforementioned pointy, multi-colored tribal hats sold by
the aforementioned ladies. Chain-smoking French hippies with unruly children, Birkenstock replicas, and Beatles T-shirts with cut-off sleeves; Thai dudes with dreadlocks, bad personal hygiene, and prison tattoos strumming ‘No Woman No Cry’ on out-of-tune guitars to an audience of enraptured foreign women; anyone in a ‘Sex Instructor: Students Wanted’ T-shirt; middle-aged white men with Taoist tattoos, beads, and roll-your-own cigarettes denouncing and lavishing praise upon an assortment of ashrams; the ‘Where you go? Tuk-tuk! Boom Boom! Body masaaaaaa..!’ guy who stands in the same place every night, and offers the same greeting, every night…

My list went on. Perhaps you too have your own KSR-related peeves?
Please send them along and I shall compile a definitive list. Don’t be too nasty. Just a bit.
And, here for your reading pleasure, is the grand winner in my own personal ‘What Annoys You Most About Khaosarn Road?’ contest…

I didn’t know fish had…

I dropped in here for 35 baht ‘thin’ noodles. Good broth. 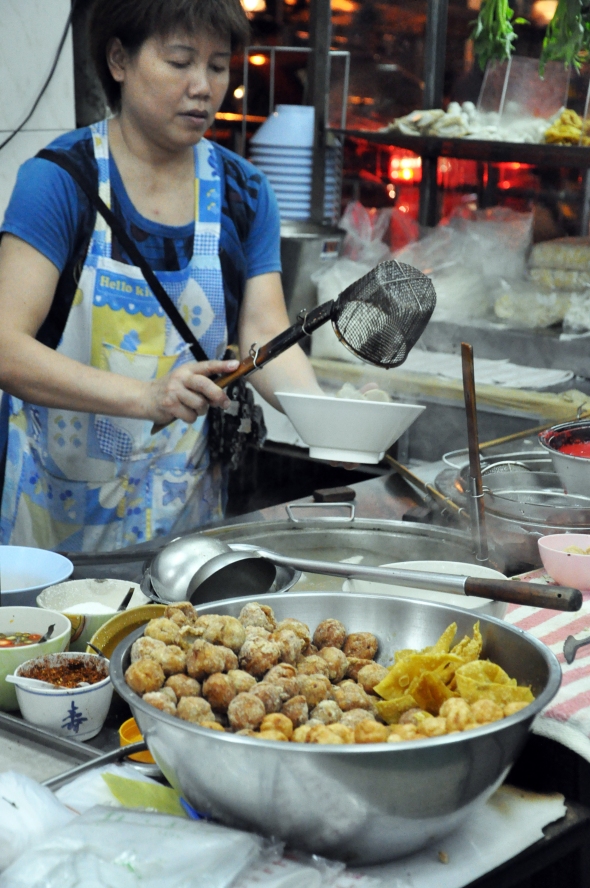 It’s a popular spot down near the Robinson department store on what used to be called New Road. By no stretch of the imagination could you call it sophisticated cuisine, but it hits the spot after a long day walking in a hot and dusty Bangkok.

Almost next door this lady was selling something that smelled fantastic in a Soi-side streetstall. I couldn’t read the Chinese characters completely, though I think ‘egg’ was in there.

Very popular spot also down near the Robinson Department store, featured in the Fodor guide to the city, thus frequented by well-heeled Farang tourists and locals.

The duck wasn’t bad, but I know what the Japanese evaluation would be: ‘Kusuri no Aji‘, ‘It tastes like medicine’. There is something in there – one person suggested it is turmeric – that is found in Japanese kampoyaku medicine, for sure. 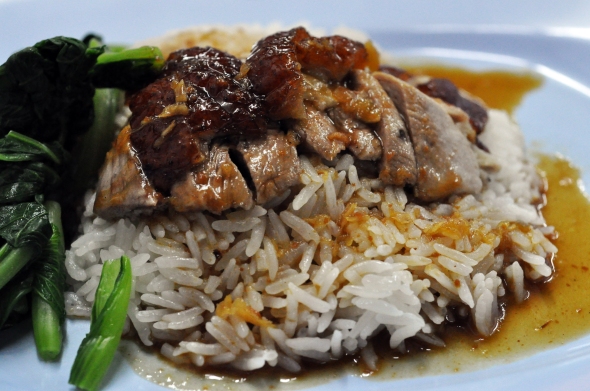 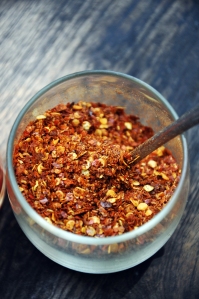 Bangkok 3: At the Praya Palazzo

I had lunch at the lovely Praya Palazzo, a former 17th-century Italo-Thai palace right on the Chao Phraya river.

I say ‘lunch’, but it was more a mini-banquet, under the kind tutelage of Poonpat Vadhanasindhu, aka Don.

Main dishes:
-Moo Pad Som Siaw: Pork and Eggplant stir-fried Curry. This was really fantastic, the eggplant had a smoky deep taste that it is really hard to find back in Japan. 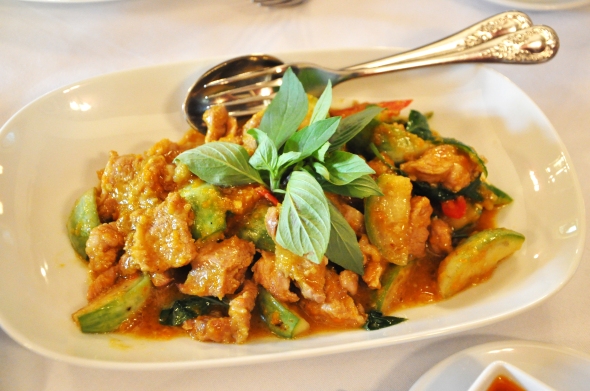 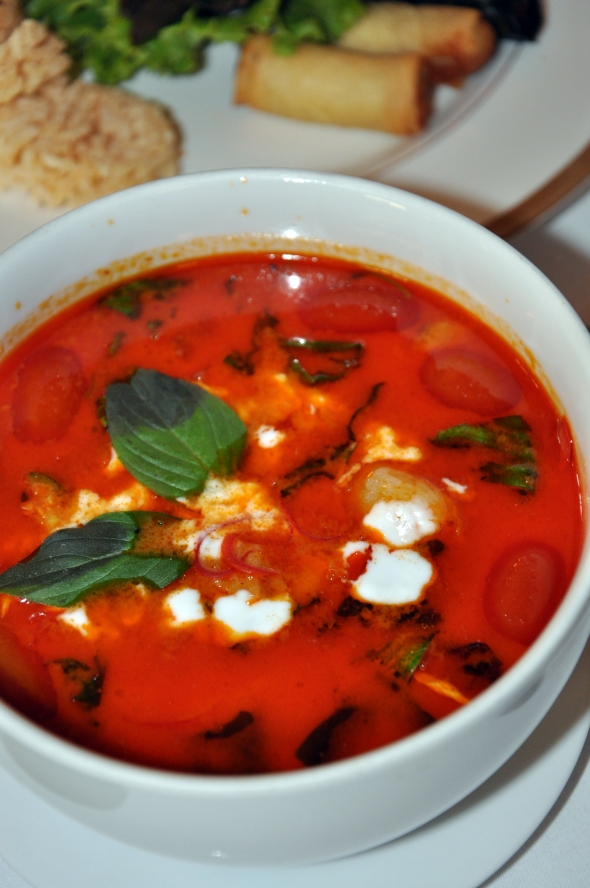 Desserts:
– Sang Ka Ya Fak Tong: Pumpkin pudding
– Foi Thong: Sweet Vermicelli Egg Yolk
– Ice Cream Ga-ti: Coconut ice cream
All these were great, but I especially liked the Foi Thong. Don told me it was created by a Japanese woman married to a Thai. Another source says “Foy Thong (Gold Egg Yolks Thread) is an ancient Thai dessert, which is served in auspicious ceremonies and was brought by Lady Witchayen in the period of King Narai. It is in popular group of desserts consisting of “Thong” (meaning “Gold”). Its name means treasure and its long thread means long life. Foreigners name it “golden hair”. Therefore, when used in ceremonies, Foy Thong is not cut.”

Another site says, “Khanom Foi Thong” or golden rain is made of egg yolk It looks like golden threads into hot syrub. This sweet is usually made for wedding ceremonies. Foi Thong is compared to the long lasting love of of brides and grooms.
Wikipedia goes with the Portuguese explanation, but does mention the Japanese ‘Keiran Soumen’:
“Like other egg-based Portuguese sweets, fios de ovos is believed to have been created by Portuguese monks and nuns around the 14th or 15th centuries.Laundry was a common service performed by convents and monasteries, and their use of egg whites for “starching” clothes created a large surplus of yolks.[2] The recipe was probably taken to Japan and Thailand by Portuguese explorers between the 16th and 18th centuries”.
Whatever its origin and name, it is scrumptious.
http://ja.wikipedia.org/wiki/鶏卵素麺
FYI, here is a sneak peak ofs what it looks like inside: 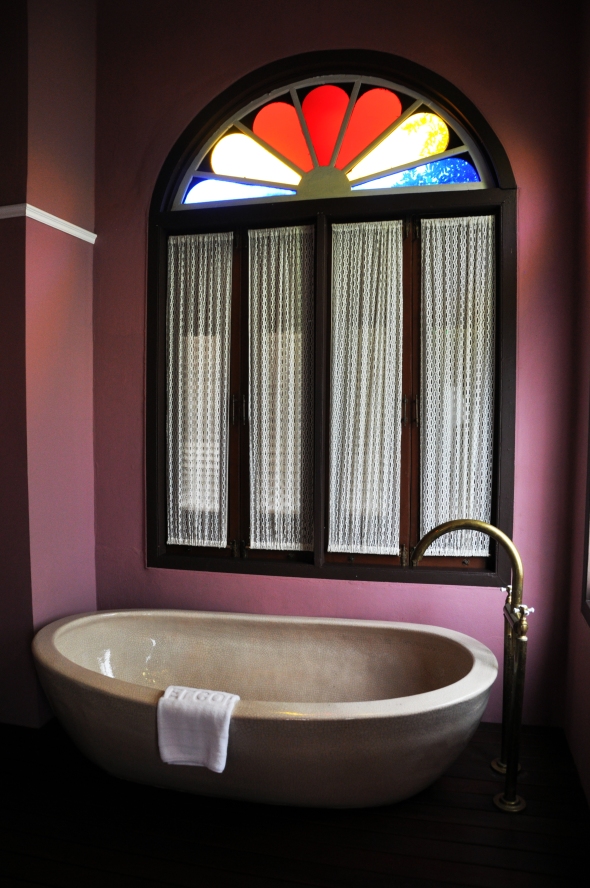 The ubiquitous Pad Thai, not at all bad this. At the place frequented by lots of Japanese backpackers on the Soi that runs East-West and parallel with Khaosan (the street with the Viengtai Hotel on it). Look for the sign that advertises food in Japanese and publicizes the waiter’s magic tricks.

Cooking my dinner. Everything flambéed here! 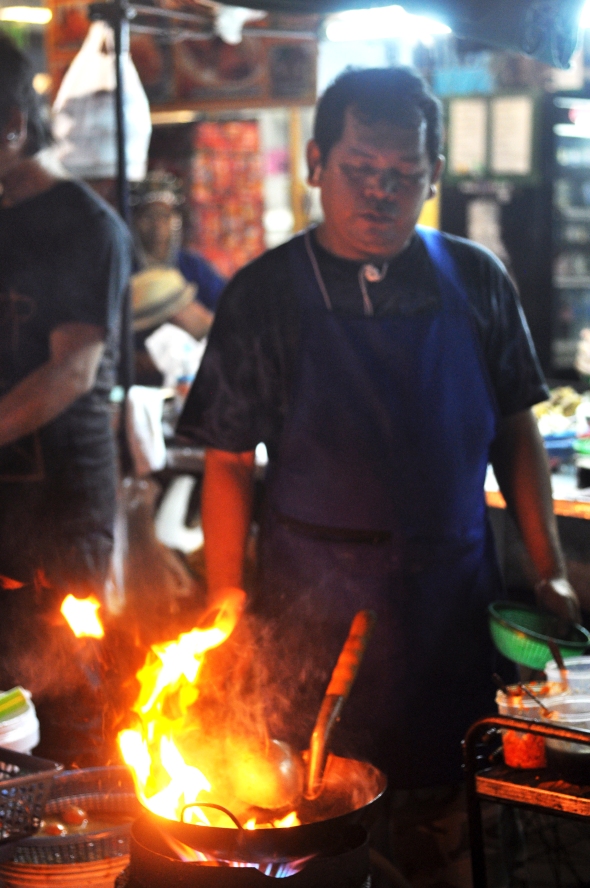 Cauliflower and Shrimp stir-fry, next-door to the Japanese-favoured place, alas as not as good as it looked. Way too much garlic.

These stir-fried vegetables at the same place were, however, great. Note the ubiquitous Tuk-Tuk, which in Thai means ‘Cheap-Cheap’. They aren’t.

Sawadee Kap. On the Road. Bangkok 1: May Kaidee’s

Writing this in Chennai, India, having spent the last week in Bangkok working on a magazine story.

I have been a regular visitor to May Kaydee’s vegetarian restaurant whenever in the Khaosan Road area of BKK for some years now. My first Thai food this trip was their ‘Thai-style Veggie Spring Rolls’, seen here. 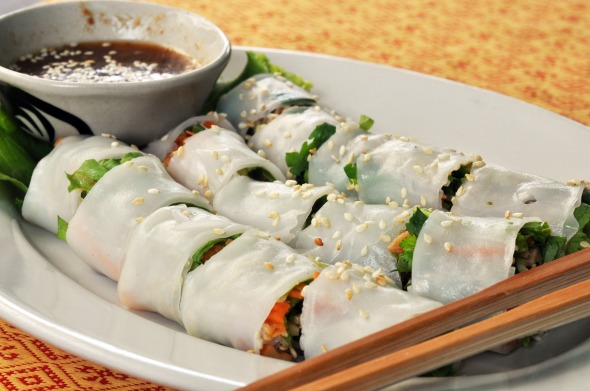 They come ‘with optional dipping sauce’ except I didn’t somehow get an option. It was a chili amayonaise dip. Nice n herby spring rolls with mint and coriander in there.

Here’s my fave cook at May Kaidee’s. Always teasing me for taking photographs of my food instead of just eating it.

My favourite is Yum Hou Plee, the Banana Flower Salad . She looked me straight in the eye, and said “I will make it hot for you”. A bit scary, that.

It was on the upper limits of my chili tolerance levels, but still damn tasty.

By the way, there are a couple of May Kaidee’s, one just down the street from where I go, and where you will indeed find the eponymous lady sometimes. But I prefer the smaller ‘original’ place. It looks like this: 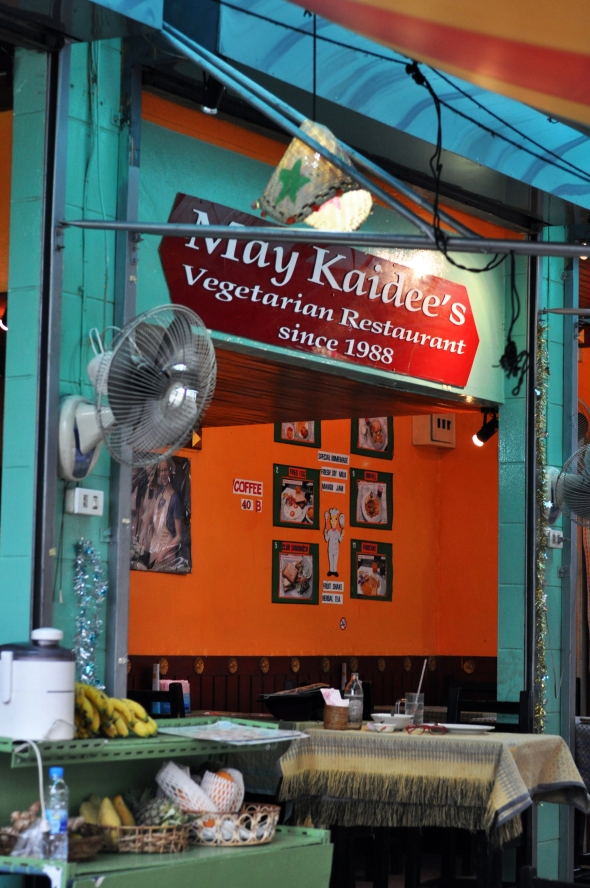 And this (below). It is inexpensive, and thus popular with the backpacker fraternity. Earwigging on the next table’s (oft loopy) conversations is all part of the fun. this trip that included a spotty British youth trying to chat up a girl from Winnipeg with tall tales of Prince Harry’s friends lavish druggy lifestyle, and three earnest but slightly confused Germans wondering about the use of swastikas in Thai temple architecture. 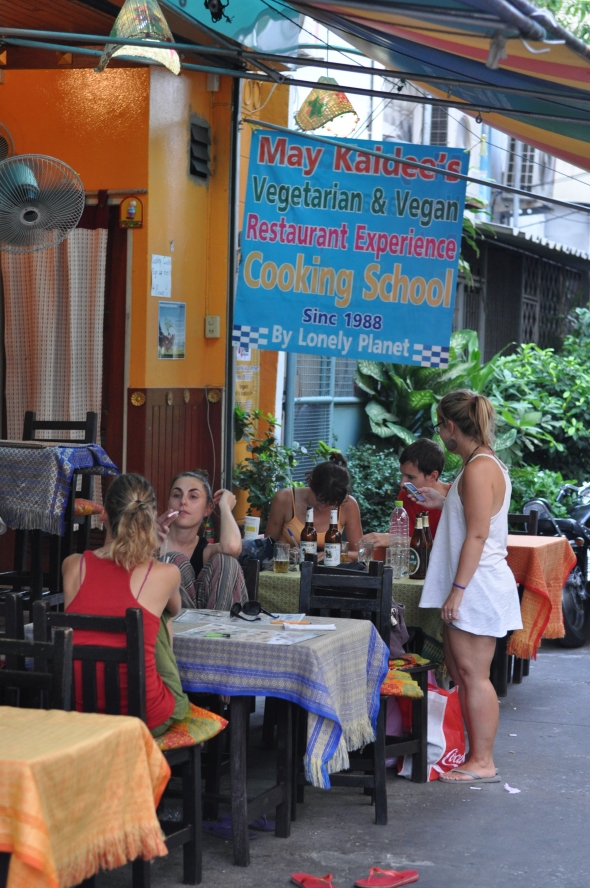 To get there head to the east end of Khaosan Road (not the Police Station end), and look across the street and you’ll see the Air Asia office. Both MK’s are in the alleyway that runs North-South behind the airline office. The one I like is opposite the ‘At Home’ Guest House. Easy to find.